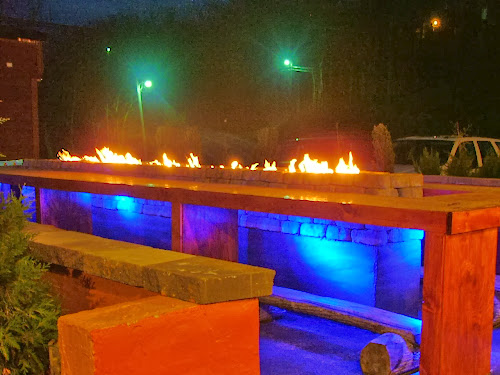 The Town continues the beautification projects, infrastructure projects and events that comply with COVID-19 restrictions.  Our visitor numbers have grown more than ever and the real estate market has exploded. 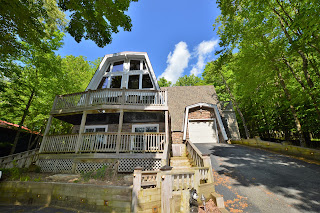 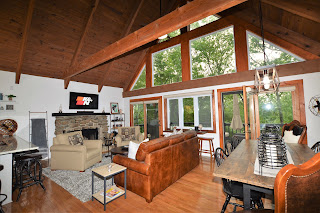 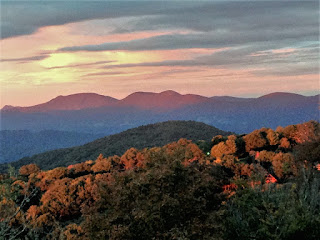 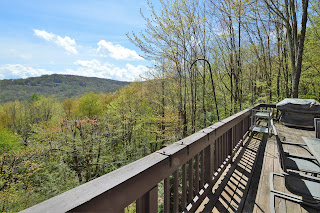 At the time of this writing, we are currently down to 28 homes and 6 condos left for sale, while there are about 150 lots still available.

With choices for outdoor activities expanding as well, the Beech Mountain Resort continues improvements with mountain biking, restaurants at 5506' and the Village, virtual concerts and yoga on the deck of 5506' with incredible multi-state views.  Hiking trails are being improved and added, the dog park has two enclosures and the walking paths are being extended.  The 3 mile back way off Beech Mountain was recently paved and restaurants continue to improve and expand their menus. 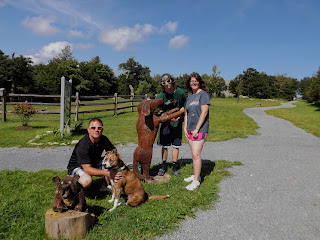 Our downtown area has a Visitor's Center for all the information you ever want for things to do, places to eat and where to shop.  Fred's General Mercantile continues to be a center of activity with the Fred's Deli, groceries, hardware, shoes/boots, clothing, memorabilia ... "If they don't have it - you don't need it" is their motto and it holds true.  The Famous Brick Oven Pizzeria offers pizza, pasta and sandwiches, a large game room, mini golf, beers from around the world and a dessert and coffee bar you just can't resist. The Alpen Inn and Bullwinkles offer everything from salads to prime rib with Sunday concerts on the lawn and the deer are almost always there to entertain. Jaliscos Mexican Restaurant is located in the 4 Seasons Hotel and White Wolf Lodge offers gifts, fudge, BBQ on the deck (what a view!) and all served with a smile. 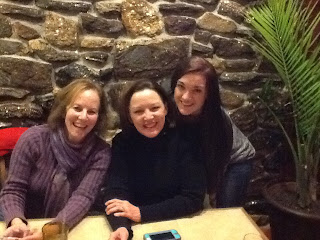 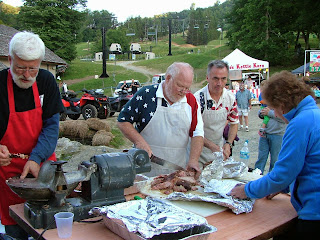 You can't go anywhere on Beech Mountain without having people wave, smile and welcome you with open arms.  The village charm is everywhere you turn.  If you haven't had the pleasure of visiting yet - make your plans to reserve a home, condo or visit for the day.  We have many rental companies as well as owner that rent through VRBO, Evolve and Air B&B.

Posted by Debbie Canady at 5:44 PM No comments: 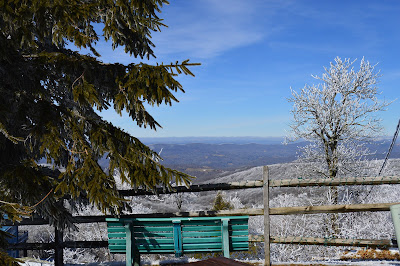 Winter has arrived on Beech Mountain.  Although we have not seen any "Big Snow" yet, we have received increments in 1-4" and expect to see more starting tomorrow.

The Beech Mountain Resort is open for skiers and snowboarders and their brewery and restaurants are open as well.  Check out their website for updates on night skiing, ice skating, tubing, music events and more.

Downtown Beech Mountain is showing off this winter with twinkling white lights, Old Man Winter blowing his winds, the lighted gold and silver ornament where you can walk in for pictures and our free sledding hill for those 12 and under.  Remember, plastic and foam sleds only - no wood or metal. 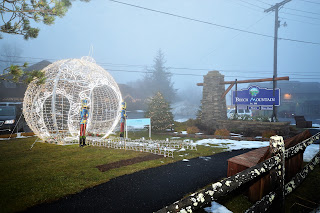 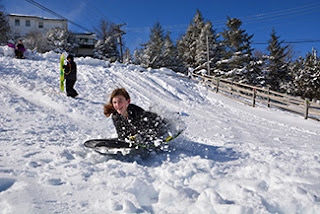 Our restaurants are open 7 days a week from chili, hot dogs and soups at Fred's Deli, to the most awesome pizza, subs and pasta you've had at The Famous Brick Oven, fish and prime rib at Alpen Inn, Jalisco's for Mexican and bar menus at Frasiers and Rascals.

Hiking, polar golf, sledding, skiing, snowboarding, tubing, fishing and more await you in Beech Mountain this winter.  We won't disappoint so come on up!

Posted by Debbie Canady at 5:33 PM No comments: 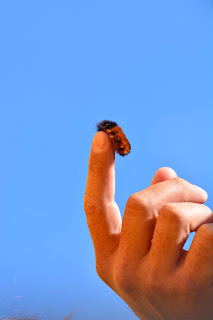 Photo courtesy of Todd Bush
The festival was created by Jim Morton in 1978 as a way to decide which woolly bear caterpillar predicts the winter weather in the NC High Country. Folklore says the 13 bands of fur on the caterpillar correspond to winter’s 13 weeks. Brown bands mean a mild week and black bands mean a cold, snowy week. Unfortunately, colors differ from worm to worm, so the festival determines the prognosticator by holding several woolly worm races on the main stage. Winners come together for a final heat, with the champion receiving the forecasting honor, plus $1,000.
The festival is run by the Banner Elk Kiwanis Club and draws an average of 20,000 people to Banner Elk during a prime weekend for fall foliage. In 40 years, it has raised more than $1.4 million to better the lives of children in Avery County.
“Getting this designation really shows Banner Elk’s commitment to the Woolly Worm Festival,” Owen said. “We recognize its importance and impact on our community.”
This year’s festival is Oct. 20-21. More info is available at: www.woollyworm.com.
Posted by Debbie Canady at 7:43 PM No comments:

The Mile High Fourth of July, a six-day celebration in the mountain resort towns of Banner Elk and Beech Mountain, features an impressive lineup of activities headlined by a concert by Tommy DeCarlo, singer of the legendary rock band Boston. 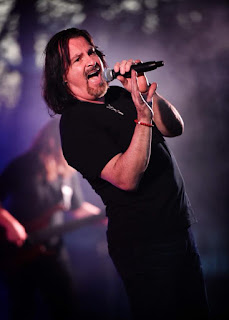 DeCarlo’s evening concert on July 3 in the Beech Mountain kite field will feature many of Boston’s greatest songs, along with other classic rock hits.

The festivities kick off Friday, June 29, with a folk-rock performance by Daniel Couper at Banner Elk Café. Friday also includes a presentation of The Wiz by Lees-McRae College Summer Theater and a presentation of Red, White & Tuna by Ensemble Stage in Banner Elk.

Saturday afternoon is highlighted by the Avery County Wine & Beer Festival with live music in Banner Elk, followed that evening by the 47th annual Roasting of the Hog and fireworks show at more than a mile high at Beech Mountain Resort.

Sunday includes mile high yoga at Beech Mountain Resort, along with another Lees-McRae Summer Theater performance of The Wiz and Ensemble Stage’s Red, White & Tuna. Sunday evening is capped with a concert on the lawn by The Lucky Strikes at Beech Alpen Inn.

DeCarlo’s free concert on Beech Mountain is Tuesday at 6:30 p.m., then the focus shifts to downtown Banner Elk on Wednesday for one of the topJuly 4th celebrations in the mountains.

Banner Elk’s Fourth of July parade begins at 11:00 a.m. and draws thousands to the resort town. After the parade, there is a noon barbecue with live music and craft beers on the lawn of the Perry House Bed and Breakfast. At 12:30 p.m., Banner Elk’s Party in the Park is a popular option with lunch from several vendors and traditional games like three-legged races, egg tosses and sack races. Folks can also enter a duckie in Banner Elk’s Duck Race on the creek in the park.

Only four miles separate the North Carolina towns of Banner Elk and Beech Mountain, so visitors can easily enjoy the festivities in both locations.

“The Mile High Fourth is great excuse to beat the heat and escape to the mountains,” says Nancy Owen, tourism director for Town of Banner Elk. “We have a full slate of activities in two friendly towns in the Blue Ridge Mountains. What more could you ask for?”

This June, Beech Mountain encourages families to get outside, expand their horizons and make memories together. Family Fun Month includes a 30-day lineup of outdoor adventures, concerts, picnics, movies under the stars and a fireworks finale. 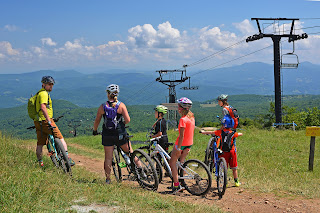 Many of the Family Fun Month activities at Buckeye Recreation Center offer guided instruction. Take a mountain biking lesson or go on a guided ride, hit the hiking trail with a naturalist, try your hand at trout fishing, or learn how to play pickleball.

“These activities provide families an opportunity to connect and bond with each other, which is important for everyone to do but particularly for families,” says Kate Gavenus, tourism director for the town of Beech Mountain. “Some vacations can be so busy, but spending time in the mountains hiking, fishing and canoeing allows you time to relax.”

New this year, the Brick Oven Pizzeria in the heart of Beech Mountain will offer a full afternoon and evening of free activities each Friday of the month in the field next door to the restaurant. Friday field days begin at 2 p.m.with bounce houses and children’s games. A family-friendly concert follows at 5:30 p.m. Movies under the stars will take place in the same location at 8:30 p.m. on Fridays and Saturdays.

On Saturday, June 16, the annual “A Cool 5 Race” begins at Town Hall. The challenging five-mile course tops out at 5,400 feet in elevation. A less strenuous option is the 1.5-mile fun run/walk or the 1.5-mile walk and wag for families with four-legged members.Family Fun Month leads right into Beech Mountain’s Mile High Fourth of July Celebration, which runs June 29-July 4. On Saturday, June 30, the famous 47th Annual Roasting of the Hog serves up some of the tastiest barbecue in the High Country at Beech Mountain Resort. Fireworks then light up the night sky above the mountain.

Several properties offer Family Month lodging specials, including three nights for the price of two. Some activities require Family Fun Month participation cards, which are available along with complimentary fidget spinners for kids 12 and under at the Beech Visitor Center.